Skip to content
Member Area > Time for bed? Setting a sleep routine in a new location.

Time for bed? Setting a sleep routine in a new location.

We’ve hit a bit of turbulence in the past month. Following a house move and the death of our wonderful Sage, everyone is feeling a little upset emotionally and in terms of routine. In our old house, Jellybean slept under the stairs, a cosy place he’d been in since moving from his crate around a year old. The collies always slept in the kitchen. In the new house, mainly because nothing was organised, all three dogs slept together in the living room. Then we lost Sage and sleeping arrangements went astray. For a few nights we had company in the bedroom, then both dogs resumed sleeping downstairs. I was happy neither seemed to miss their big brother.

In the past 10 days, we have had night time shenanigans. Jellybean likes to snuggle. Guinness does not. Cue JB trying to use his big brother as a hot water bottle (something Sage always tolerated) and Guinness objecting. Neither were settled as a result. Initially this was Jellybean yipping at night when we initilly went to bed and left them. More recently it’s been 5am wake up call, with three hours of intermittant yipping until alarm wake up at our usual time. Clearly no-one is settled or enjoying this upset.

The intention was always to get Jellybean back under the stairs in our new house. I’ve bought paint and wallpaper, even ordered a new bed for him but it always takes longer than you imagine to get sorted. So in the past few days I’ve started getting him used to his new sleeping area gradually, setting him up for success, keeping everything positive and making sure I’m being kind and sensitive to his feelings.  All this while instilling a routine that his sleeping place will be under the stairs. The same procedure is advised whether you have a new rescue dog, a young puppy or indeed following a life changing event such divorce, death of a family member or house move.

Firstly, we’ve played loads of ‘into bed’ games into his new bedroom under the stairs. If you’d like to know how to teach this from scratch, have a look here.

Playing ‘into bed’ to his new sleep zone under the stairs.

Next, I decided day time naps would take place under the stairs in his new bedroom for a few days. Following an extra long walk to maximise his chances of settling, I played some ‘into bed games’ eventually closing over the baby gate barrier.  He’d been given a Bob&Lush Gravy stuffed frozen Whimzee chew to help him settle. If you’d like to read more about why chewing helps reduce stress and encourages a dog to settle have a read of this blog I wrote a while back.

The sounds of a Jellybean chewing on his afternoons on snack while in his ‘Harry Potter’ bedroom.

For this first nap in the new sleeping zone, I recommend sitting close by, busy with work, TV or a good book, within sight to reassure if needed that my company is still available. Within a few days repeating this, I start to gradually move out of sight, first to make tea or pop to the loo, occasionally staying away longer for household chores but returning within sight each time. Within a few days, I’ll move away and stay away, back working at my desk while he sleeps. 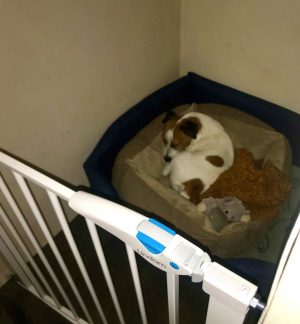 If Jellybean makes a noises that he is distressed or upset during this process, I will always make myself available to reassure, settle him down and make him feel better. But nap time will still take place in this new place, so I won’t open the gate again until he’s finished his sleep. With young puppies if you feel they need the toilet, please do bring them outside, then return them to their settle down space and start again. If your dog wakes up from his nap and you let him out of his safe space, but falls asleep again immediately, then put him back into his new sleeping zone as before to settle again. Remember you’re setting a routine that the place to settle is in this ‘safe space’ area.

Once Jellybean has had several day time naps time under the stairs, only then will I begin to repeat the routine over night. Typically if the training is done during the day, then night time routines slot easily into place as this is a time associated with sleep already.  I’ll let you know how that goes in a few days when we move on to having him sleep in his new bedroom over night. The painting and wallpapering needs to be finished first!