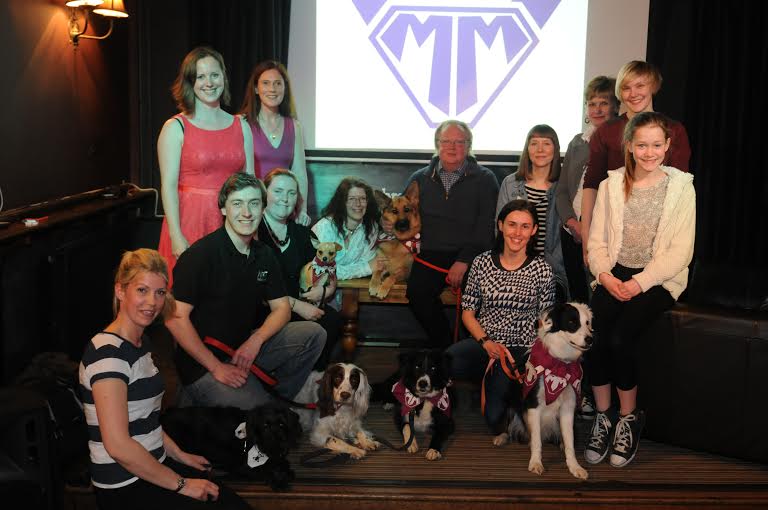 When a group of North East dog owners signed up for a dog training class last Summer, they never thought their pooches could become celebs. But that’s now on the cards for the North East’s first all dog cast, after they made a short film which premiered in Newcastle in April. ‘Motley Mutts, The Rescue’ is a joint project between local trainer Sue McCabe of Muttamorphosis and Nathan Squires of MBT Productions.

The film follows a familiar good dog, bad dog plot-line, with angelic Jack Russell cross Rose, dog-napped by villain Border Collie, Guinness. The rest of the Motley Mutts gang must collect bones as ransom to save their doggy damsel in distress. Eleven dogs in total joined the cast, all trained by their owners and with the help of Newcastle dog trainer Sue McCabe. ‘When they signed up for a tricks training course, most of them thought they’d be learning paw, or roll over’ says Sue McCabe, who runs Mutamorphosis Dog Training in Newcastle. Owners were surprised to find their dogs had been cast in a film, and they learned how to train the tricks needed for their movie roles.

‘The film, grew out of an idea originally intending to showcase what pet dogs and their owners can do with just a little bit of training’ Sue explains. When a North East producer also signed up for class with his dog, the project grew wings. The end result, a short film which premiered at an event in Newcastle last night, is the first all-dog-cast movie of its kind. ‘People love to watch dog and cat videos on Youtube, so we always intended for the film to be available for everyone to enjoy’ said director and producer Nathan Squires. The movie proves that, as long at they are well trained, the old showbiz saying about never working with animals really isn’t true at all.

‘Motley Mutts, The Rescue’ premiered in Newcastle in April, with 50 VIP guests lucky enough to view the film on a big screen. It was given a 5 paw review by Chris Scott of The  Tyneside Cinema, who attended the event. If you like it, share if far and wide.